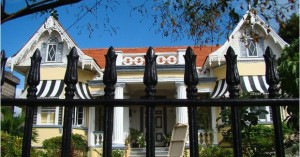 The Grenada National Trust is pleased to announce that during the month of May 2013, we will be taking control of the management of the beautiful Priory House Property and its splendour gardens, situated in Church Street, St. George?s.

The Priory is considered to be the most outstanding building of character in St. George?s, if not Grenada. Its beautiful Greek revival fa?ade, accented with Victorian details, projects a majestic presence along historic Church Street, once lined with some of the prettiest domestic houses in St. George?s Town. It is believed that The Priory or the ?Priests? House? was constructed in the late 1700s by the Roman Catholics as a Presbytery for the Dominican order. Over the years, it has seen a number of alterations, but a noted change was the addition of the front and the bay windows when the house was sold and renovated in 1917 after the Dominicans moved into the newly built Vicariate further up Church Street. Between 1996 and 2001, the property was fully renovated to an exceptional standard and has become the jewel of St. George?s Town, topping the Government?s list of official historic buildings. This gingerbread-style house remains quite unique to St. George?s Town and Grenada.

When the Grenada National Trust was approached about the possibility of managing this historic treasure, it jumped at the opportunity. The GNT is presently in negotiations with the owners of the Priory, Mrs. Pratizia and Mr. Pietro Banas, to develop a management plan for the operation of this property as a national historic building.

Trust pushes for Leapers Hill to be protected

Follow Me!
Trust pushes for Leapers Hill to be protected

Grenadines to be recognised as World Heritage Site
Scroll to top