All Saints’ Day and All Souls’ Day are annual Christian festivals held on the 1st and 2nd of November each year to honour the Christian Saints and celebrate the souls of the departed, respectively. On All Saints’ Night friends and relatives of the dead gather at cemeteries to light candles on their graves as a remembrance. On All Souls’ Night candles are lit on the steps of homes in the hope that the deceased will “find their way home.” These rituals are also associated with asham which is parched, ground and sweetened corn. 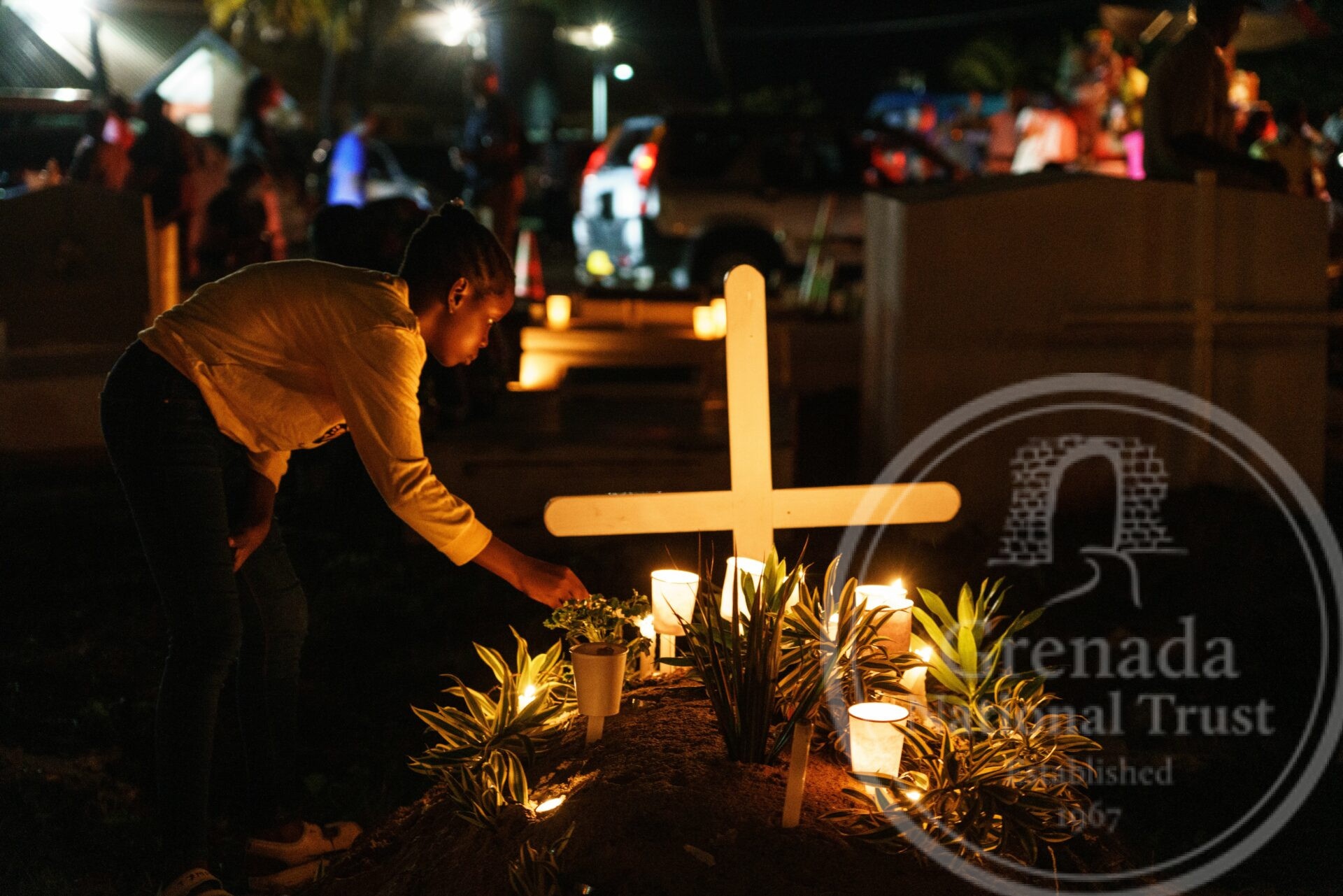 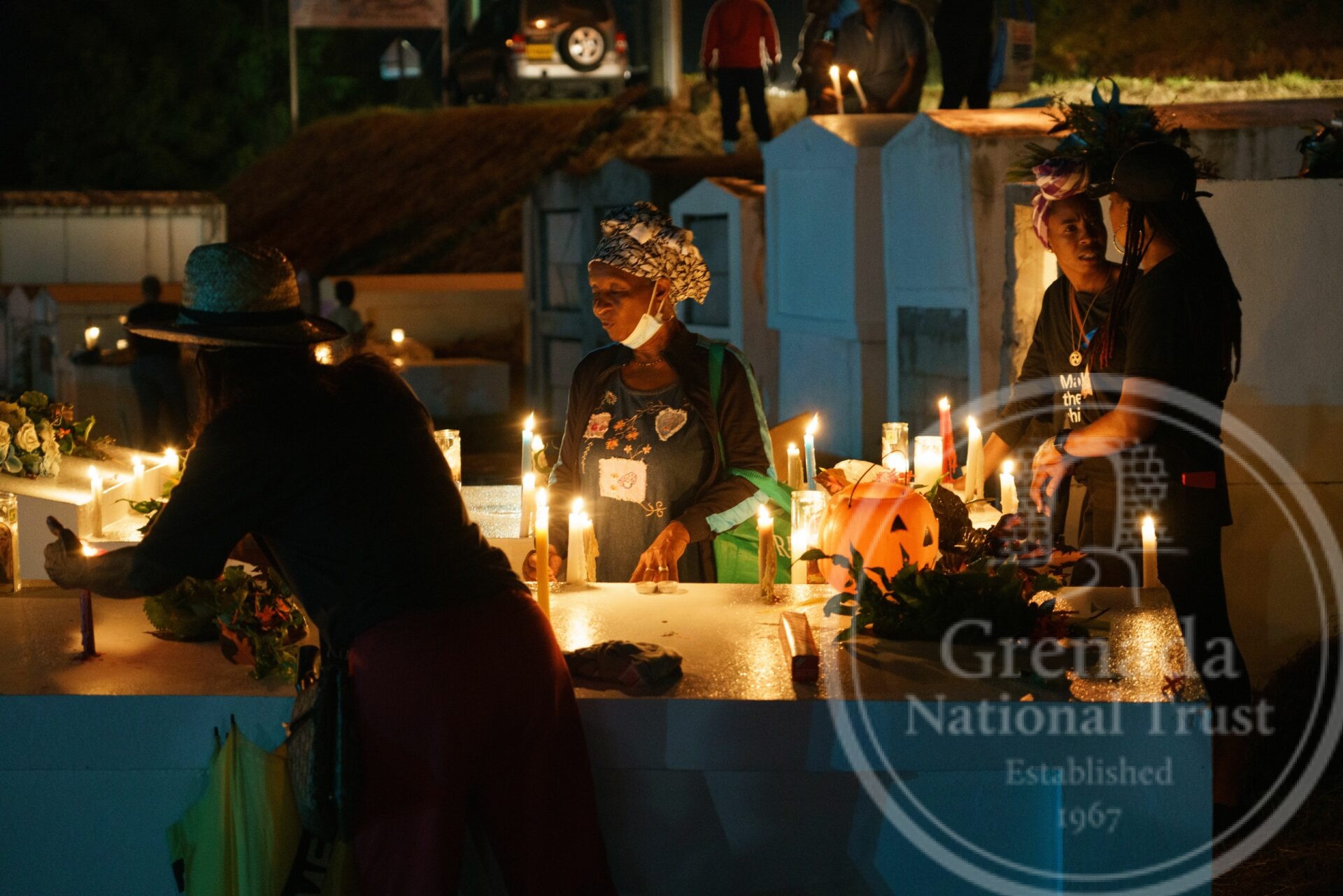 Even though this event has not been documented in this first pilot inventorying fieldwork due to limited resources and timeframe, this element is alive as local people are still practicing it each November to honour their loved ones who have passed away.

Dancing of the Flag and Cakes is a unique marriage ritual common to Carriacou and Petite Martinique. They precede the religious ceremony and reception when the families “meet up” in the streets to begin the joining of the couple and their families on the morning of the wedding. These two rituals are meant to demonstrate the union of marriage, but also to confirm the man as the head of the household. Its origin is unclear, but this Creole practice was created in the Grenadines, combining African dancing and European folk wedding traditions. 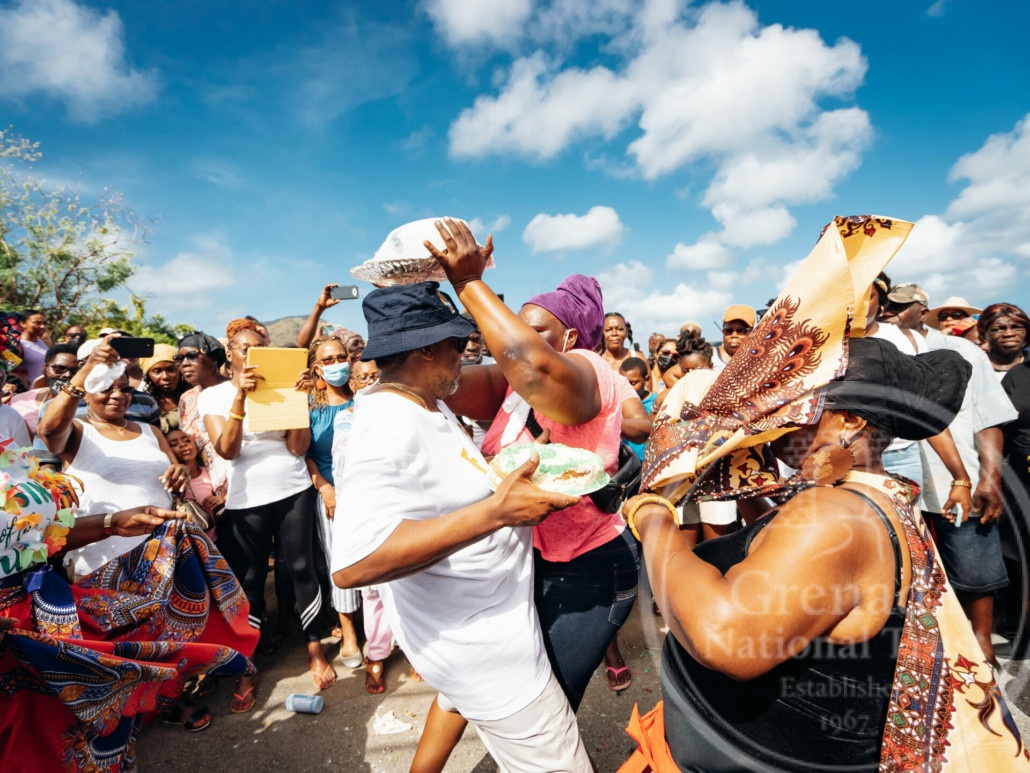 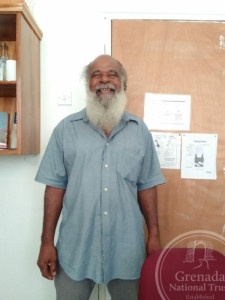 DJab-DJab is Grenada’s most unique J’ouvert masquerade and for which it is well known. It derives from the Jab-Molassi (“Molasses Devil”) Mas that dates to slavery or soon thereafter. Jab-Jab began as small groups of men and boys parading through the streets of the rural parishes daubed in “old oil,” but today, large groups of people with glistening black skin, some wearing helmets with protruding cows’ horns and other unlikely adornments, parade through the streets beating drums and pans and singing songs. Their grotesque appearance is meant to shock and scare. It is Spicemas at its best! Ou lay ou lambé, ou lay ou la! 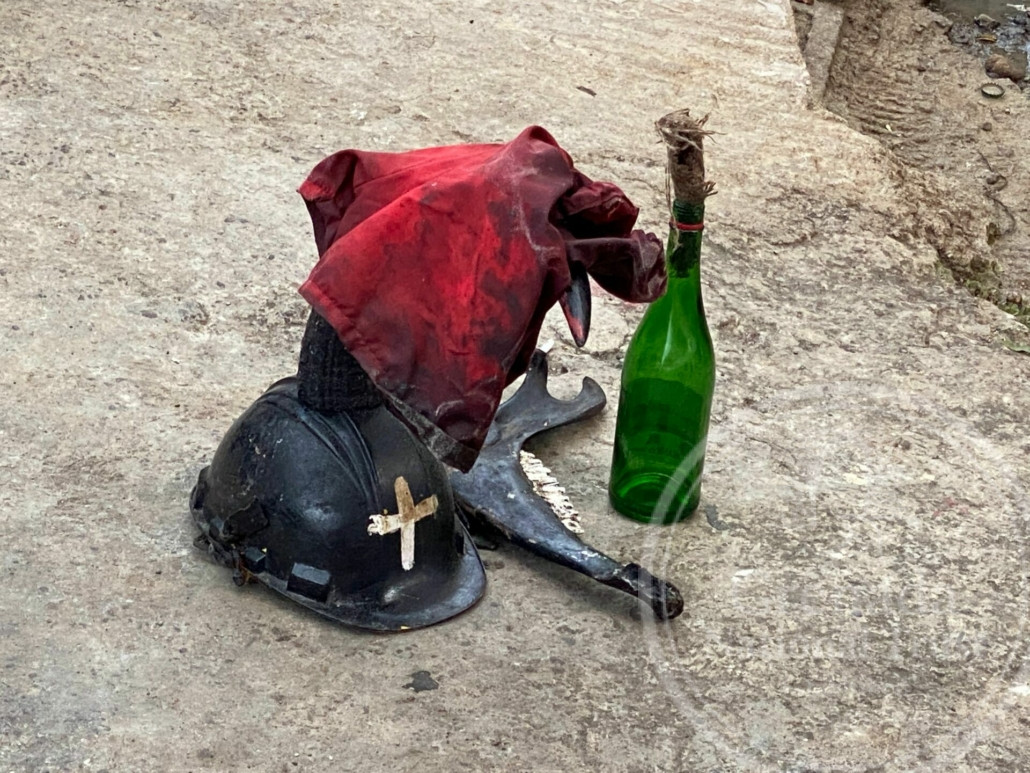 During Carnival in Grenada (August 2022) this well recognized ICH-element was documented by the ICH-teams in different communities by interviewing some practitioners as Colin Dowe, Glenn Forsyth, Clary Joseph & Vaughn Thomas, La Fillete. 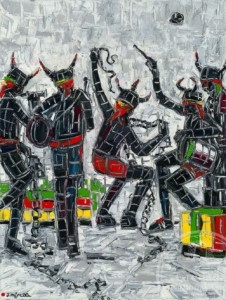 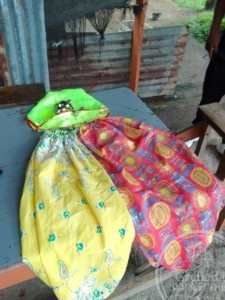 Shortknee masqueraders, dressed in colourful baggy shirts, knee-length pantaloons, mirrored tunics, head coverings and face masks, menacingly stomp through the streets, chanting catchy refrains and throwing powder into the air as they move to the rhythms of their “woolos” or foot-bracelets of tinkling bells. Dating to the mid-1900s, this traditional mas originated in the village of Chantimelle, St. Patrick, but is popular in the bordering rural parishes. All dressed in identical costumes to disguise their individual identity, they stomp through the streets at Carnival in their characteristic serpentine movements followed by a cloud of powder dust. Retire!

The Proud of my Heritage ICH fieldwork teams were able to interview, learn and document the Shortknee practice by visiting Captain Chantuelle/Hennessy Jeffrey (85 years old) & Hensley Jeffrey, Captain Andy Purcell “Lakay”, Lionel Alexander, Alister Thomas, Davis Richards; and Mask Makers David Lewis and Frank Bartholomew. Some threats perceived are the centralized structure and diluted practice in Grenada’s territory, lack of visibility and a stronger competitor as people feel more appealing the Djab-Djab practice which is performed during the same Carnival season in August. 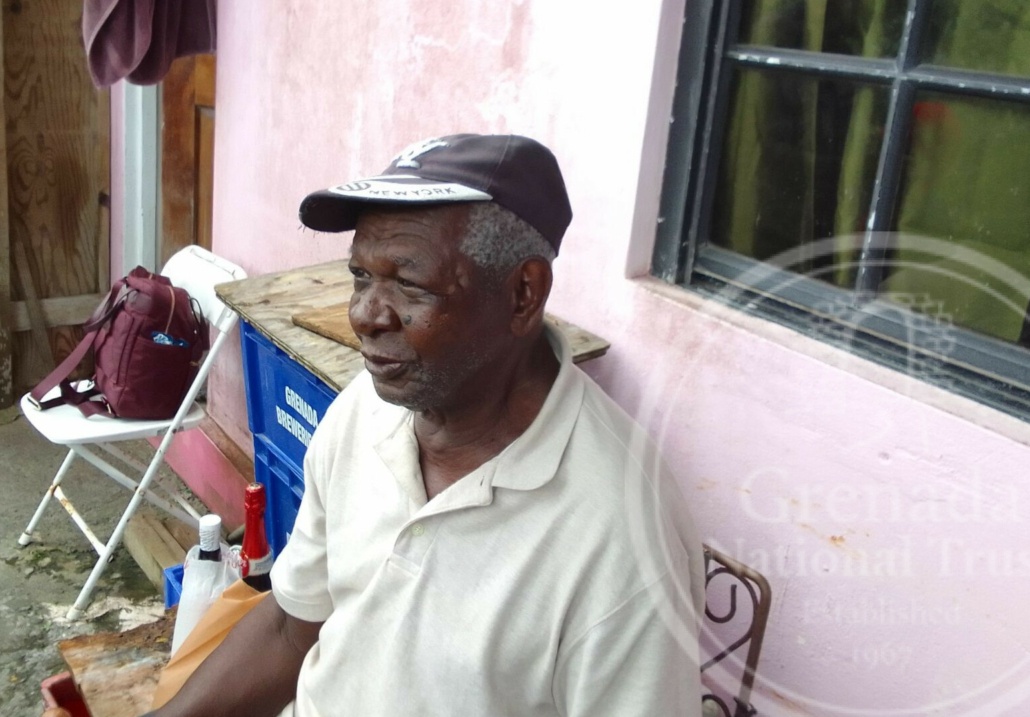 Maypole is a folk dance once common in Grenada, deriving from the European celebration commemorating spring rites and fertility and brought here in the late 19th century. Eight dancers, both males and females, each holding a multi-coloured ribbon attached to the top of a bamboo pole, weave in and out of each other, plaiting the ribbons in a circular pattern along the pole to create designs like a “spider’s web,” “ladder,” or “basket.” Folk music, calypso and other songs can accompany the dancers. The costume for men is a pants, petticoat and ‘kang kang’ while the women wore a short skirt with a polly underneath and a colourful top.This dance was also once popular at Carnival but is rarely seen today. The maypole is still danced in Grenada, with its stronghold in Windsor Forest, St. David, and Carriacou during May and goes up to Carnival in Grenada (August). 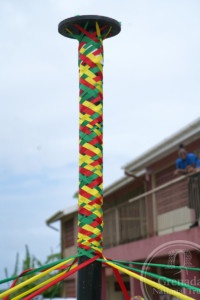 Between April and September 2022, the Proud of my Heritage – ICH fieldwork teams interviewed several ICH-Maypole bearers. Lady Cheryl Antoine, one of the elder icons and ICH-bearer of Maypole in Pomme Rose, St. David, Grenada, was able to transmit to the students of St. Joseph Roman Catholic School the Maypole dancing, performing and singing. Other ICH-bearers were visited in Grenada and Carriacou as Reginald Brizan, June Paul, Marilyn Thompson, Tyrelle Paul and Olive Paul, Gary Antoine & Arlene Joseph.

Most of these cultural practitioners manifested their concern to the continued enactment and transmission of this element as the lack of opportunity and financial resources to showcase and transmit it to the general public, including younger generations.

If you wish to support further Maypole initiatives and/or any Living Heritage element, kindly contact us at admin@grenadanationaltrust.org and/or HeritageGrenada@gmail.com

Bèlè or Belair is a bare-foot folk dance which resembles the historical European Lancers and Quadrille dances, and incorporates African elements that define it today. Two versions of the Bélé are usually performed, the Bélé (plain) and the Grand Bélé. The women–costumed in brightly coloured head scarves, long-sleeved dresses and long white-laced petticoats–and men–in gandy shirts, red headband, white trousers or dungarees and bracelets–move to the beat of drums, with stylised and sensual foot movements. It is often referred to as the oldest Creole dance in the region and is common in the islands with colonial French influences.

Even though this ICH element has not been documented in this first pilot inventorying fieldwork due to limited resources and timeframe, some local dance companies are doing efforts to keep this element alive and have recognized and expressed the need to do more research and fully document this living heritage element in further ICH inventorying initiatives.

If you are involved in transmitting and/or practicing Bèlè or Belair Dance in your community and wish to share more information and material (oral testimonies, photos, videos, interviews), please feel free to contact Grenada National Trust and help us to keep alive this important element. 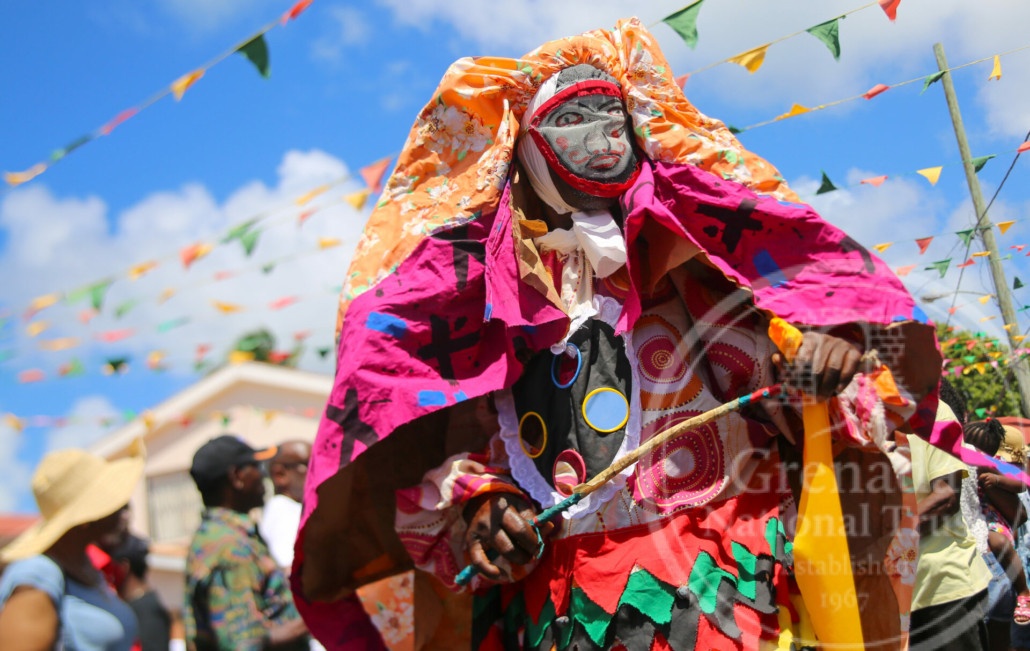 Shakespeare Mas is a unique Carnival masquerade to Carriacou, but derives from Grenada’s speech-mas tradition and stick fighting that illustrates Carriacou’s own history and culture in this Creole synthesis. The costume is a colourful shirt/tunic emblazoned with a black heart and mirrors over a white petticoat, face mask, long cape suspending from the head onto the back, and bullwhip. It takes to the streets of villages to the town Hillsborough each Carnival where players do mock battles in their recitation of verses from Shakespeare’s Julius Caesar, and if they should err, they are harassed about their padded crowns. Brave!

Persons and groups in villages across the island participate in the ‘Shakespeare Mas’, but those of Mt. Royal, Six Road sand Mt. Pleasant are historically identified with the element, and today it is widely recognized that these villages remain as the main areas associated with the element. Special recognition to ICH/Shakespeare Mas group and practitioners in Carriacou as:

“Banroy” representing villages to the south, which include Bellevue South, Belmont, Harvey Vale, and L’Esterre.

Jenny Duncan and Mary Noel, who have been training students at the Mt. Pleasant Government School since 2012.

Faithlyn George, one of the first women to play Shakespeare Mas’, has also been training students in her community of Harvey Vale since 2015.

Glenroy Boastwain, a current Shakespeare Mas’ King, is training children in the primary and secondary schools in Carriacou.

George Andrew, a local businessman, and his family based in the diaspora, render support to defray the cost by providing materials for costumes.

Lydia Andrew, a seamstress which sews for free.

The late Stephen Alexander, President of the Carriacou Historical Society and Museum, was a staunch supporter of the mas’ and its continuity. 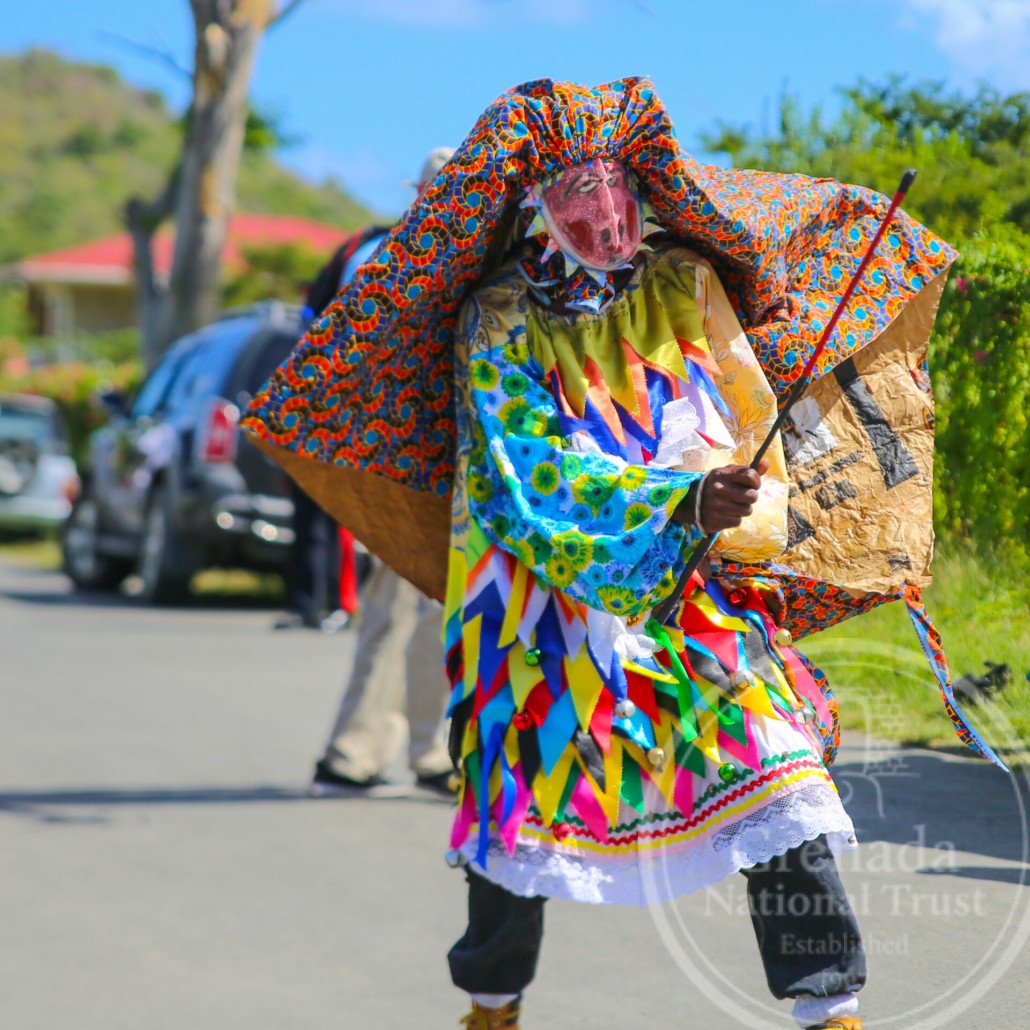 Due to the importance of this element among Carriacou communities and its unique characteristic and location, Grenada has proposed this element to be nominated and included at the Representative List of the Intangible Cultural Heritage of Humanity (UNESCO). Courtesy by Grenada Tourism Authority.

The islands Grenada, Carriacou and Petite Martinique are surrounded by the sea and fishing is an important resource and livelihood for fisher families. The many fishing boats seen across Grenada and the Grenadines are crafted by skilled boat builders who have inherited their craft from generations of Grenadian boatbuilders. Beautifully captured here are two fishing boats with their seine or nets cast to catch near-shore reef fishes. Once ready, fisher folks will be seen “hauling nets” along the beach as they bring in their catch. 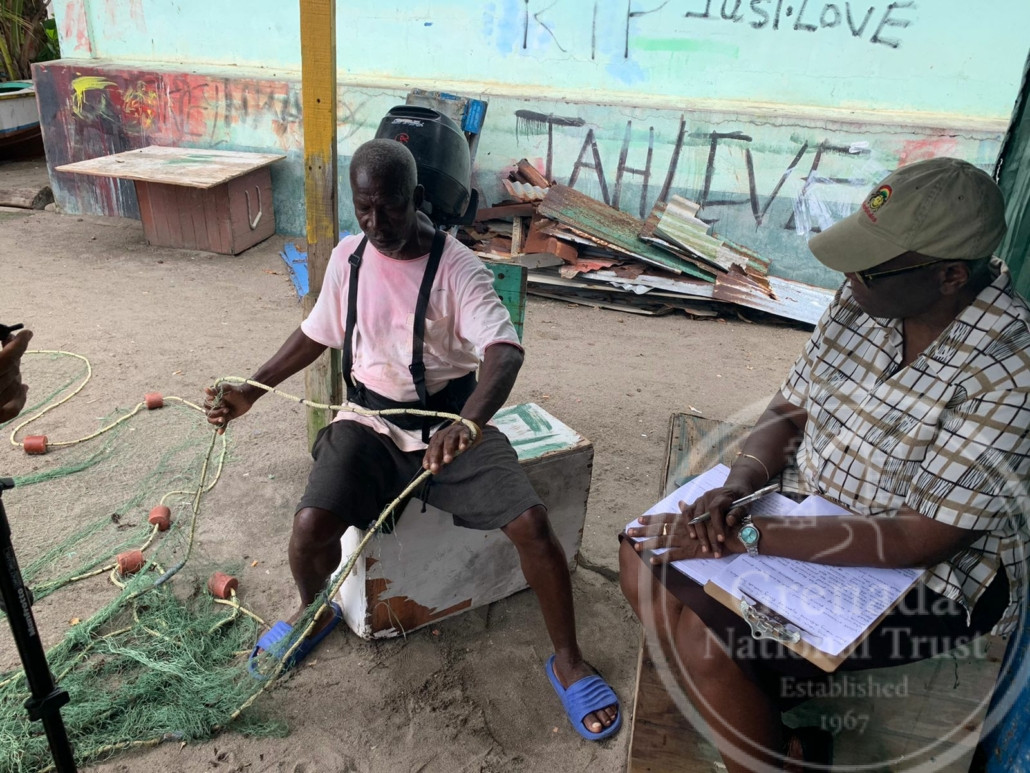 In October 2022, the Proud of my Heritage fieldwork teams were able to interview and recognise two fishermen, Daniel Phillip and Desmond Gill. 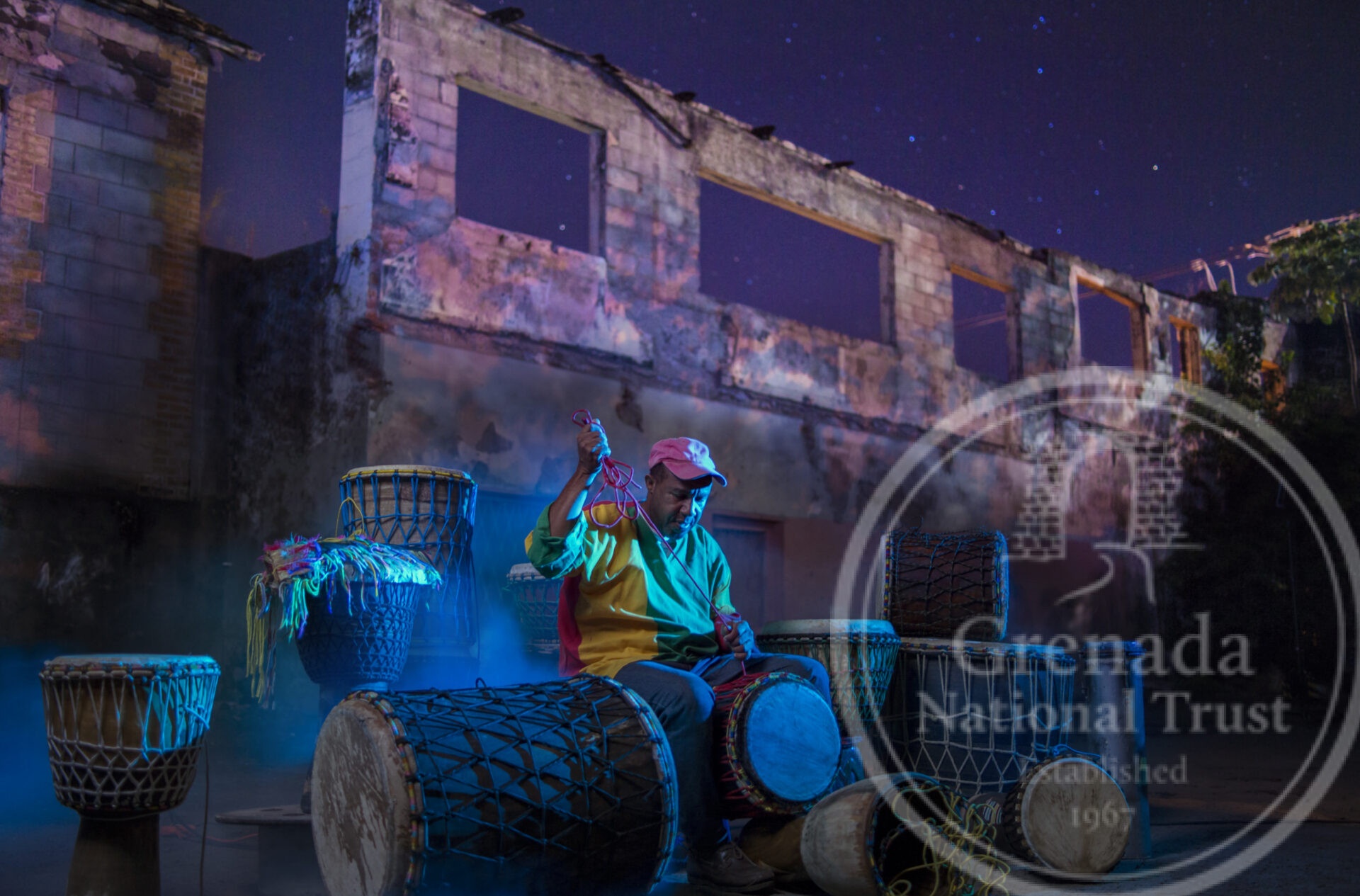 Drums are the most common musical accompaniment to many folk cultural expressions, having survived slavery despite being prohibited and outlawed. There are various types of drums, most of which are locally made by traditional drum makers, including bongo, cut(ter), jembe and congo; most are beaten with the hands, but a few with a stick. Here, master drummer Monteith “Monty” Drayton sits surrounded by his drums, putting the finishing touches on one of his drums. 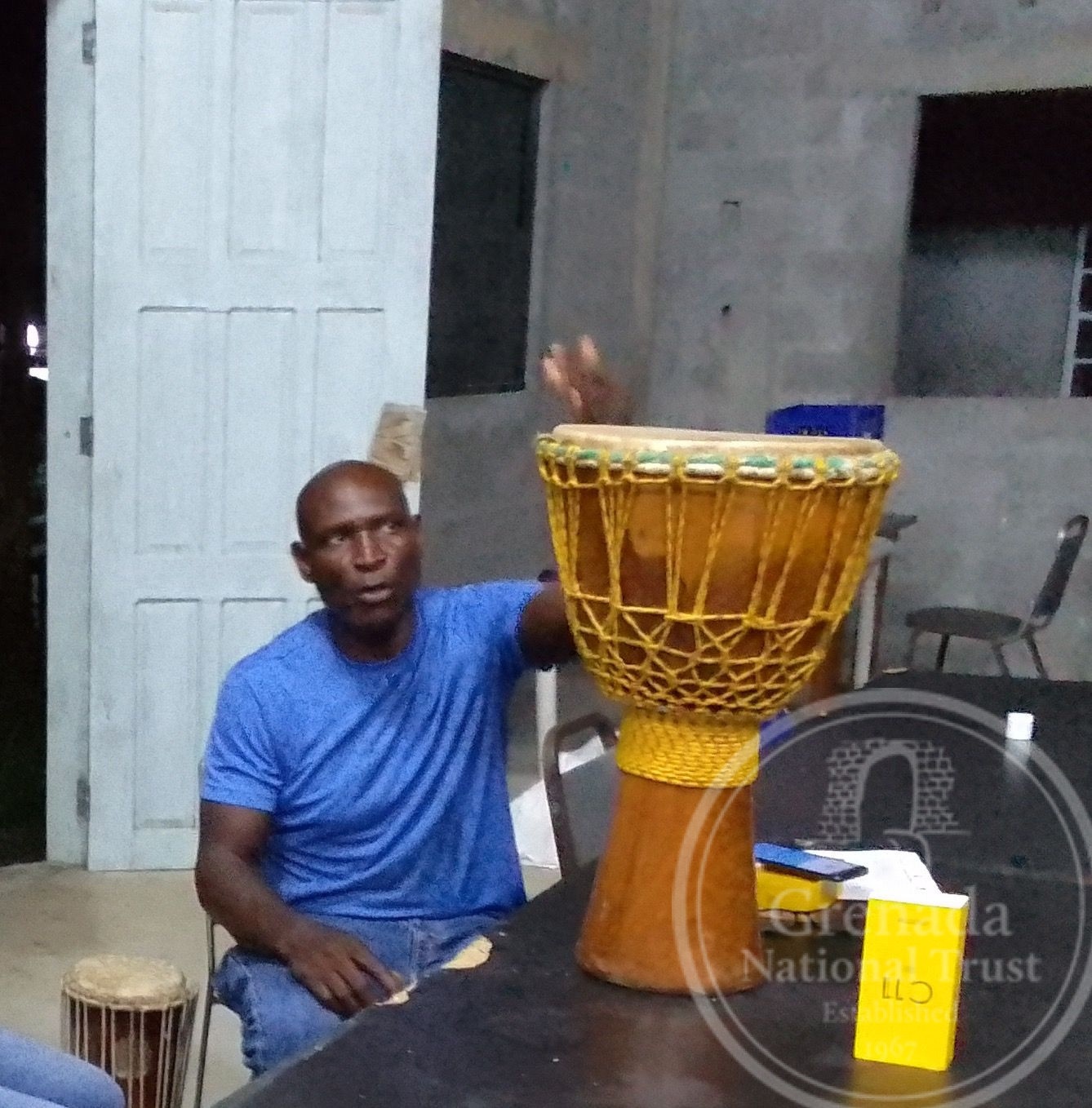