William Montieth Drayton (Monty) is a cultural conservationist in Grenada who wears many hats; among them, teacher, story teller, drummer, drum maker, singer and dancer. To add to the plethora of knowledge he has gained over the years, through his own research into our history and culture, last year he went to Morocco to study Animation in the Hotel Industry: a short course about keeping guests entertained through the performing arts.

I recently interviewed him at the Grenada National Museum, where he has volunteered for over 15 years. For this, he had taken a break from drumming with his band of young drummers and as we chatted the sound of the drums in the background seemed a fitting serenade to the rhythm of his story. Here’s a Q&A with Monty.

What exactly do you do?

I currently volunteer at children’s homes and homes for the disabled teaching our traditional culture through drumming and singing. I also visit schools and community groups to do the same. I’ve worked with various performing arts groups all over Grenada and therefore know a myriad of songs and dances from the various corners of our country. Because of this I can identify variations in dances that are common to Grenada, like the Belè and tell you which parish they are from. Not every community does the Belè in the same way. I believe that River Sallee and Carriacou have the most authentic flavour of our dances. In fact, River Sallee has about 12 different versions of Belè. They once had a very vibrant folk group but in very recent times have fizzled out. I did everything in my power to resurrect that group. So right now I am coordinating with a church up there to organise to do a workshop to teach drumming there and hopefully revive the arts in this community.

How did this all begin?

My Genesis was with my brother, Mervin, a drummer and panist, who was very particular about his drum. We (my 3 other brothers and I) used to have to steal his drum to practise, when he was away. One day, when we thought he had gone, he doubled back on us and found us playing. He was shocked to discover how well we could play and this led to us forming the Drayton drummers band. My father, Malcolm Drayton, also influenced my path. He had a steelpan band, whose members later formed the now well known Angel Harps Steel Orchestra. Growing up at home he would always play a lot of Jazz and Classical music. This intelligent music enhanced my drumming.

The Drayton Drummers played in the community and became the national drummers of the revolutionary government. During the Gairy regime, in the 70s, we had to look over our shoulders while we played because the Police could come take your drum and destroy it. This was, perhaps, because it was towards the end of the Black Power movement, in which drums were used to carry the effect of power, bravery and fighting against the system. But this did not deter me. I moved on to the Roots Vibrations Band in which we did a multiplicity of spectacles around Grenada and in Carriacou: bike stunts, acrobatics, fire displays, chanting. As a boy, I even drummed for the hotels. This was before they paved the roads.

Why is the work you do important and what are some of the challenges you face?

I want to pass on our traditional culture and to ensure that the people I am teaching learn properly to pass it on to the next generation. I ensure they understand the history and the importance of drumming in the community because after doing my research, I realised that nothing was done in Africa without the drum. Be it for an invited guest, planting, reaping, teaching, death, birth, festivals, the drum was always played.

We are cut off from that now because of the misconceptions from some religious people. Religious people caused a negative vibe concerning some of our dances and drumming. Shango, for example, got a bad name because we were colonized by the members of the traditional church, who went against our drumming. Yes, I know some people have negative intentions when they drum but what is a drum? A piece of wood and goat skin. How evil is that?

I’m also concerned that I’m not seeing enough involvement from the government. Sometimes, I believe I am the Minister of Culture because I do so much. After going to Africa, no one from the government has tried to engage me to utilise my new knowledge. If I were in the Ministry of Culture, we would get money to develop every cultural program. We are not convincing the Prime Minister that our project is a good project. We are not trying to develop our product and take the culture to the next level. I’m concerned that there is a generation that is dying, a generation that needs that.

What are you most passionate about?

I love to play the Saxophone and I’ve always loved the guitar, even if I’ve never had the opportunity to play. I also love teaching and playing for the disabled. It’s joyful, I’m energized. If I don’t go, I’m not strong. One time, it took me a year to realise that a certain guy was deaf and mute because he followed the rhythm so well. I love to see them move to the rhythms. There’s a guy there I look at and I feel I could make a dance based on how he moves to the drum.

What are your plans for the future?

I dream to get the opportunity, one day, to go to the US and teach 1000 people to play the drum, free of cost and their payment would be to take this newly learnt skill and go into homes for the disabled everywhere and to teach and play for disabled kids. 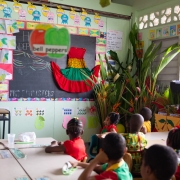 Follow Me!
School And The Great National Pride Lesson

The Last Major Pandemic In The Caribbean
Scroll to top